In Part I of this post, we described the challenge created by enforcement of the Employers’ Liability Exclusion in a CGL policy against a claim that the injured employee making a claim against the insured was a “temporary worker,” and therefore exempt by definition from the exclusion.  In Part II, we examine a game plan for successful enforcement of the exclusion.

While every jurisdiction has its nuances, there are some common elements to the applicable law of the temporary employee exception to the Employers’ Liability Exclusion.  The two most common areas of contention in the case law are the issues of control over the employees performance, and whether the putative temporary employee was “furnished” to the insured employer.

A majority of jurisdictions hold that unless a co-employer somehow is shown to have control over the decision to employ, or over  the parameters and/or the time, hours or compensation of  the putative temporary employee at the insured employer’s business, temporary employee status is not likely established.  See, e.g.,.  Empire Fire and Marine Ins. Co. v. Jones, 739 F. Supp. 2d 746 (M.D. PA. 2010); see also, Nautilus Ins. Co. v. Gardner, 2005 U.S. Dist. Lexis 4423 (E.D. Pa. 2005).

“Temporary worker” means a person who [i]s furnished to you to substitute for a permanent “employee” on leave or to meet seasonal or short-term work load conditions.

Others seeking to avoid the Employers’ Liability Exclusion have argued that “furnished to” is a liberal and flexible concept, and can include  self-furnishing, or even a mere recommendation or endorsement by a co-employer to the insured business owner.   Both such arguments  have also been unsuccessful, however, in certain jurisdictions.  Empire Fire, supra;  Mendenhall, supra.

Let The Facts Fall Into Place

The facts more often than not will self-settle the case into the Employers’ Liability Exclusion — it is a broad one, and is designed to carve out a large space occupied by workers’ compensation insurance.  Moreover, the “temporary employee” definition is a narrow one, attempts to widen it notwithstanding.  Successful enforcement of this exclusion takes advantage of this exclusion/exception anatomy.

In the example from Part I of this post, there are no doubt facts which might be used to make an argument that the injured employee was in fact temporary, entitling the employer to defense and indemnity under the CGL policy.  The employee, the argument goes, was hired to replace another employee going on leave, and was “furnished” by way of the co-employers recommendation to the insured employer.

If the factual situation looks  by overview like something which should be covered by workers’ compensation insurance,  there is a fair chance that the Employers’ Liability Exclusion of the CGL applies to relieve the CGL insurer of the duties of defense or indemnity of the insured employer.

For more information on successful enforcement of CGL and other policy terms provisions, and exclusions at reasonable, stable monthly subscription fees,  reach  me at chaddick@dmclaw.com or 717-731-4800.

Part I – The Problem

The scenario is not at all uncommon:  a worker  suffers injury at a worksite, and through  the vagaries and  vicissitudes of life, and  for manifold reasons, the business owner has a CGL policy but no applicable workmen’s compensation coverage.  The injured employee was fairly new, and has now filed suit against his (assumed) employer and another company also on the worksite.

This seems straightforward enough:  The applicable CGL policy contains a well-worn, well-known Employers’ Liability Exclusion which disclaims the duty to defend or indemnify the insured business owner for any claims arising out of injuries to employees.  It commonly reads:

This insurance does not apply to:

This exclusion applies whether the insured may be held liable as an employer or in any other capacity and to any obligation to share damages with or repay someone else who must pay damages because of the injury.

The difficulty lies, sometimes, in the Definition of who is an “employee,” some of which commonly reads as follows:

“Employee” includes a “leased worker”. “Employee” does not include a “temporary worker”.

“Temporary worker” means a person who [i]s furnished to you to substitute for a permanent “employee” on leave or to meet seasonal or short-term work load conditions.

Rarely do the interests of injured employees and employers looking for protection converge.  But in seeking to avoid the Employers’ Liability Exclusion,  such rare common ground appears.  An injured employee wants a fund against which recovery can be made for his or her injuries.  An employer, who for one reason or another finds himself without workmens’ compensation coverage, needs protection from liability for the loss.  The CGL carrier is a convenient solution for everybody — except, of course, for  the CGL insurer, who has neither priced, nor underwritten, nor issued workmens’ compensation coverage for the insured business owner.

Square Peg, Round Hole, No Matter

Thusly, the elegant dance begins.  In examinations under oath, the insured business owner refers to the injured worker as an “employee,” and spoke of “hiring” him or her.  No mention is made of the employee being furnished by a co-employer, nor is  there any mention of the fact that the injured employee was actually brought on temporarily, or to substitute for another employer who was going on medical leave.

Several months later, however, the injured employee files suit for his injuries , and the insured business owner has received a reservation or rights letter f rom the CGL insurer, agreeing to provide a defense but reserving all rights to disclaim coverage  under the Employers’ Liability exclusion.  The landscape has changed — and the Employers’ Liability Exclusion now poses a grave problem for both the injured employee and the insured business owner.  The definition of “temporary worker” definition to the rescue…

We will answer that question in Part II of this post. 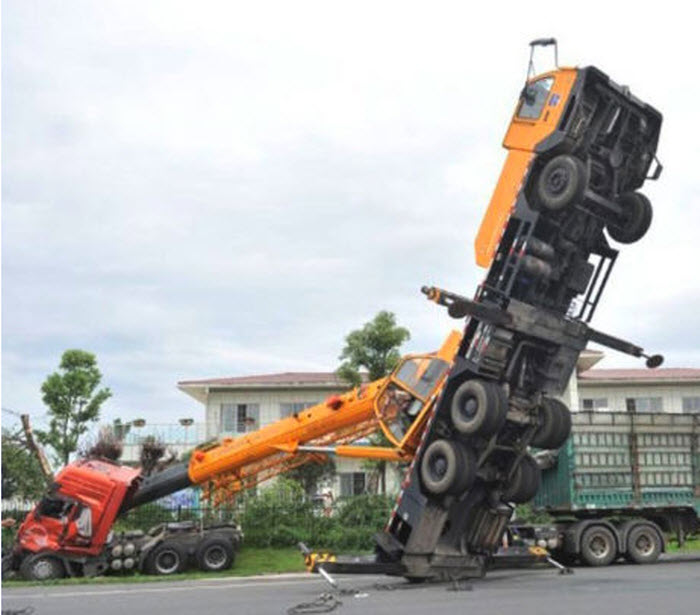 GRETNA, LA., March 22 – The U.S.  Fifth Circuit Court of Appeals  has upheld a trial court determination  that the insurer of a Louisiana-based marine crane builder owed no coverage for a 2009 accident caused by poor welding. The Court ruled that the insurance policy did not apply because it covered only  vessel-related incidents and not incidents on land.

State National Insurance Co. insured Elevating Boats LLC, for losses payable for the liability of the policyholder, as the owner of a vessel, for any incident or loss arising out of ownership of the vessel.  In 2009 worker Larry Naquin Sr. had sued Elevating Boats for personal injuries on the theory negligent welding of the crane in question.  During a test Naquin was running on the crane, the crane separated from its base and fell over, killing one, and causing Naquin two broken feet and a hernia.  The accident occurred on land and nowhere near a vessel, according to the opinion:

“Naquin’s incident in no way arose out of EBI’s conduct as ‘owner of the vessel …Furthermore, the land-based crane did not break on or even in close proximity to a vessel. Thus, EBI’s attempts to craft a causal connection to a vessel are discharged, plainly and simply, by the underlying facts and Naquin’s holding.”

In May 2012 a Louisiana federal jury found that EBI was negligent in welding the crane to its platform and that it was therefore liable for Naquin’s injuries.  During those proceedings the trial judge granted State National’s motion for summary judgment, finding that the policy did not cover incidents on land.

Naquin urged an interpretation of a  “blanket reading” of State National’s policy such that it would provide coverage for  “any casualty or occurrence,” but the Appeals Court found the argument “strained,” and contrary to common law which required a vessel- related loss in such circumstances.

The 5th Circuit Court concluded,  “Naquin’s incident in no way arose out of EBI’s conduct as ‘owner of the vessel.’”

BILOXI, Jan. 5 – The Mississippi Supreme Court ruled that the destruction of a beachfront home by a barge which became loose from its moorings during Hurricane Katrina was not a covered loss under the applicable homeowner’s insurance policy.

In Porter v. Grand Casino et al, Chreryl Porter’s beachfront vacation home was completely destroyed by a barge owned by Grand Casino that had become loose from its moorings as a result of Hurricane Katrina.  She submitted a claim to her homeowner’s carrier, State Farm, which denied the claim, citing a policy provision excluding coverage for property damage arising out of flood, surface, and tidal water.

Porter filed breach of contract and bad faith claims against State Farm, arguing that the cause of the loss was Grand Casino’s barge, and not water.  She also filed claims against Grand Casino and her insurance agent, Max Mullins.  The trial court granted summary judgment for all defendants, and the Court of Appeals affirmed.

In affirming the judgment in favor of State Farm, the Mississippi Supreme Court in a 7-1 ruling held that the homeowner’s policy excluded from coverage any losses  which would not have occurred but for the movement of surface water.  The Court referred to policy language which stated, “we do not insure under any coverage for any loss which would not have occurred in the absence of … [w]ater damage,” and  ruled that where water caused the debris to collide with the property, such a loss was properly excluded.

Louisville, Jan. 21.  A U.S. District Court Judge in Kentucky has ruled that neither Travelers or excess insurer Cincinnati Ins. Co. have a duty to defend Bellarmine University in a wrongful death suit brought by the estate of a university lacrosse player who died while participating in conditioning drills.

On January 21, U.S. District Judge Charles R. Simpson granted the insurers’ motion for judgment on the pleadings, holding that the policy’s Athletic Participants Exclusion Endorsement relieved the insurers of the duty to defend or indemnify Bellarmine in the underlying death suit.   The endorsement excluded coverage for bodily injury “to any person engaged in athletic, exercise, or sports activities” sponsored by the university.

The Court held that Travelers did not contract to ensure the exposure for which Bellarmine was seeking defense and indemnity.  It also held that the excess policy issued by Cincinnati did not apply, as it contained language disclaiming coverage for any loss which came within an applicable exclusion in the language of the primary policy.